A few years back a friend showed me a demo reel by someone by the name of Peter Starostin. My jaw dropped fairly fast when it started rolling. He seems to have archived a high breed 3d animation style. His style maintains a very natural feel to motion while the exaggeration with arcs and timing add a lot of humor and general appeal.

The timing of the motions remind me of the 1 frame pops you see a lot in family guy. Distortion of the mesh seems very subtle too, just enough to feel the impact. To this day, he holds one of my favorite animated style. So in return, I thought I would do a breakdown of his first animated spot he has featured on his reel. I'm not sure what the name of it is so ill just call it " Box Struggle".

I broke it down into 5 parts. The 6th part has no character movement, so I didn't take that into account. Some stylist things I notice is the amount of acceleration the teapot and boxes have on impact. Also He seems to reuse the idea of locking up joints to add exaggeration. For instance when he grabs the box in the beginning he props up the box with this elbow then locks it into place. Later he locks his knee into place to keep the box up. Then at the end, when the box falls on him, his spine, neck and face all lock up before falling. 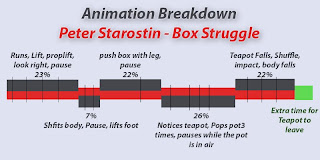 It seems as if he uses the rule of three quite a bit in this test. He pops the teapot 3 times before failing, he struggles with three objects. When he looses balance with the front box he falls down in three beats.. He shuffles, he gets hit by the box and he falls.

Another thing I think is important to take notice to is the amount of exaggeration. The main distortions seem to happen in the eyes, legs, arms, and head. They only distort for maybe 2 frames at a time though. This is most evident when the taller box slams him on his head. And it usually happens when he's under extreme weight. Along with mesh distortion his neck and knees tremble under weight.

I think its important to understand and recognize what it means to have a good animation. I hope you all got a lot out of this breakdown. See yah next time!